MTI radars: The MTI radar’s main objective is to reject the signals from stationary unwanted signals i.e., ground clutter, rain clutter, bird clutter, etc., that arrive as an echo along with the desired echo of the signal. In MTI, the processing system is used to eliminate unwanted clutter from the background and to detect moving targets even when the velocity of such targets is small relative to the radar platform. There are two basic types of MTI radars, namely,

In coherent systems the receiver preserves the transmitted wave’s phase in order to detect the Doppler shift in frequency. In coherent MTI systems, the Doppler shift in the echo signal from the moving target is used to differentiate it from stationary target. But in non-coherent MTI systems, the moving targets can be detected by observing the relative motion between the target and clutter background, and also by observing corresponding changes in amplitudes of pulses. Coherent detection requires dealing with the envelope of a signal, g (t) and the phase of the sinusoidal carrier, Φ (t). They need not be measured directly, but can be derived using inphase (I ) and quadrature (Q) channels.

There are two basic types of MTI radars, namely coherent and non-coherent MTI. The coherent MTI radar differentiates moving targets from stationary targets by using the Doppler shift passed on to the reflected signal by a moving target. The non-coherent radar detects the moving targets by the relative motion between the target and the clutter background and, thus by the corresponding amplitude changes from pulse to pulse or from one antenna scan to the next. In Coherent systems, the phase of the transmitted wave should be saved so that it is used by the receiver to detect Doppler shift in frequency, but it is not required in non-coherent systems.

The composite echo signal fluctuates in both phase and amplitude when it is reflected from a moving target and clutter. The Doppler component of moving target can be identified by the coherent Pulse Doppler radar and MTI radar using the fluctuations in phase of the signal. The MTI radars are categorized into two types.

A non-coherent radar is defined as an MTI radar which uses amplitude fluctuations instead of phase fluctuations. An internal coherent reference signal or a phase detector is not needed by non-coherent MTI radar. The IF amplifier used in this radar should be linear and should have large dynamic range. It can be logarithmic so that logarithmic-gain characteristic provides protection from saturations. Amplitude detector is used after the IF amplifier and this detector is a conventional detector. The local oscillator need not be very stable. The figure shown below shows the block diagram of noncoherent radars.

The major advantage of a non-coherent MTI is that it is simple and it is mostly used in applications where space and weight are limited. The improvement factor of the non-coherent MTI, is not good. Clutter itself is the reference signal in the non-coherent radar. It will not detect moving targets, if clutter is not present.

Coherent MTI radars can be of two types:

For MTI radar, the local oscillator’s stability of superhetrodyne receiver must be more than the stability of local oscillator of radar which is not having Doppler. There may be a possibility of appearing uncancelled clutter residue at output of delay line canceller. This may lead to wrong detection of moving target although only clutter is present.

Instead of an amplitude detector as in the non-coherent radar, there exists a phase detector after the IF stage. This act is similar to a mixer in which the received signal coming from IF and the reference signal from the Coho is mixed to produce the difference between their frequencies. This difference is the Doppler frequency. The input signal applied to the power amplifier is nothing but the sum of Coho fc and Stalo signals fl. This is accomplished in the mixer as shown in above figure.

MTI radars using a magnetron oscillator in place of an amplifier

The two methods described earlier are not the only ones that are used for obtaining coherent reference signals in the MTI. The various arrangements may be classified accordingly: whether 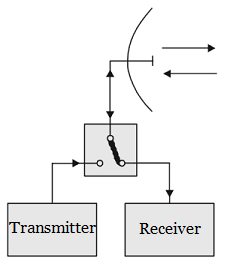 Duplexer and its types