Hence it is absolutely necessary to use a method of analyzing systems that overcome most of the above-said difficulties. The modern method discussed in this post uses the concept of the total internal state of the system considering all initial conditions. This technique which uses the concept of state is called State Variable Analysis or State Space Analysis. It is essentially a time-domain approach but it has a number of advantages compared to conventional methods of analysis.

Initially define the concepts of state, state vector, and state-space before proceeding for modeling in state space.

3. State Vector: This is a vector consisting of n number of state variables that completely determine the behavior of a dynamic system.

4. State Space: The state space is an n-dimensional space whose coordinate axes are the n number of state variables that completely determine the behavior of a dynamic system. Any state can be represented by a point in the state space.

Block Diagram and SFG of a Continuous State-Space Model

Step 1: The state-space model of a system is obtained by using one of the methods which is to be discussed in the following sections.

Step 2: The individual state equation and output equation are written by using the obtained state-space model.

Step 3: The block diagrams for the individual state equation and output equation are drawn.

Step 4: The number of integrators used for the given state-space model is n (order of matrix A).

Step 5: The individual block diagrams obtained in Step 3 can be interconnected in an appropriate way and by using the n integrators, the block diagram for the given ­state-space model can be obtained.

The schematic illustration of a system given by equations \dot{x}(t)=Ax(t)+Bu(t) and y(t)=Cx(t)+Du(t) is shown in figure below. The double lines indicate a multiple-variable signal flow path. The blocks represent matrix multiplication of the vectors and matrices.

Step 6: Once the block diagram of the state-space model is obtained using the steps mentioned in the Signal Flow Graph post, the SFG for the model can be obtained.

The state-space model representation of an electric circuit is done as follows:

Step 1: For a given electric circuit, there exists p number of state variables and q number of output variables.

Step 2: Determine the number of input signals m for a system.

Step 5: Using the chosen state variables, the differential equations of a system obtained in the previous step are modified to obtain its first-order derivatives.

Step 7: Finally, by defining the matrices, the state-space model of the electrical circuit is obtained.

The advantages of state-variable analysis are: 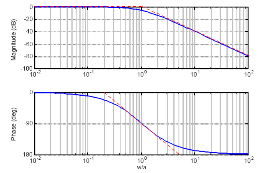