To illustrate this let us consider a contour in the s-plane which encloses one zero of G(s) H(s), say s = α1. The remaining poles and zeros are placed in the s-plane outside the contour as shown in given figure below.

For any non-singular point in the s-plane contour, there is a corresponding point G(s) H(s) in the GH-plane contour. Let s follows a prescribed path as shown in the clockwise direction making one circle and returning to its original position. The phasor (s − α1) will cover an angle of −2π while the net angle covered by the other two phasors, namely (s − β1) and (s − α2) is zero. The phasor representing the magnitude of G(s) H(s) in the GH-plane will undergo a net phase change of −2π.

If we have p number of poles and z number of zeros enclosed by the contour in the s-plane, the: contour in the GH-plane will encircle the origin by (p − z) times in counterclockwise direction [since (s − p) is in the denominator of the open loop transfer function, G(s) H(s)].

For a system to be stable, there should not be any zeros of the closed loop transfer function in the right half of s-plane. Therefore, a closed loop system is considered stable, if the number of encirclements of the contour in GH-plane around the origin is equal to the open-loop pole of the transfer function, G(s) H(s).

Thus it can be stated that if the open-loop transfer function G(s) H(s) corresponding to Nyquist contour in the s-plane encircles the point at (−1 + j0) in the counterclockwise direction the number of times equal to the right half s-plane poles of G(s) H(s), it can then be said that the closed-loop control system is stable.

The transfer function of a feedback control system is expressed as

The study of the stability of the closed-loop system is done by determining whether the characteristic equation has any root in the right half of the s-plane. Or, in other words, we have to determine whether C(s)/R(s) has any pole located in the right half of the s-plane. We use a contour in the s-plane which encloses the whole of the right-hand half of the s-plane. The contour will encircle in the clockwise direction having a radius of infinity. If there is any pole on the jω-axis, these are bypasses with small semicircles taking around them. If the system does not have any pole or zero at the origin or in the jω-axis, the contour is drawn as shown in the below figure (b). A few examples of the application of the Nyquist criterion for stability study will be taken up now.

The advantages of Nyquist plot are:

Determine the value of K for which the system is stable by applying Nyquist criterion.

Putting s=jω, than we get using rationalization,

The crossing of Nyquist plot at the real axis can be found out by equating the imaginary part of the above to 0.

The value of K is found as

Here the encirclement of −1 + j0 has been in the clockwise direction two times, hence N = −2. There is no pole on the right-hand side of the s-plane and hence P = 0 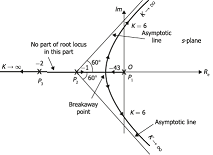