In other words the picture information is not transmitted alone. They carries the various signals along with such as the blanking pulses to make the retrace invisible and synchronizing pulses to synchronize the scanning at the transmitter and at the receiver. All the components all together are known as Composite Video Signal (CVS).

Composite video signal can be represented either with positive polarity or with negative polarity.

In the case of Positive polarity, whiter the scene, higher is the amplitude of the video signal. Blanking level is kept at the zero level. Below zero level is the sync pulse. Sync top is at the most negative point as shown in figure below.

In most of the TV systems, negative polarity is used to modulate the video carrier.

In spite of these disadvantages, we use negative modulation in all TV systems because it has more advantages.

The Voltage levels tor sync pulse, blanking pulse and video are different, so that these pulses can be separated easily in the receiver. Voltage division multiplexing is used to keep these pulses and signal at different levels in CVS. There are two ways of indicating the levels:

For modulated signal, the various pulse levels are indicated in terms of percentage of carrier level. For positive polarity, white level is at 90%, whiter than white goes up to 100%, blanking level is at 75% and sync pulse top is at 0%.

Peak White Level is the level of video signal when the picture information being transmitted corresponds to the maximum whiteness. This level is fixed at 10 to 12.5% of the maximum value of the signal.

The signal level below the peak white level i.e. form 10% to 0% level is referred as whiter than white level.

The  negative modulation, the black or dark level shown at 72% of the maximum level.

Signal beyond the black level from 72% to 100% of the maximum signal level is known as Blacker than Black level.

The blanking level in composite video signal is represented by 75% of the carrier level. This level is also known as pedestal level.

DC Components of the Video Signal

Since the amplitude of various picture elements varies continuously, the video signal has an average brightness of the scene. Rx cannot follow the changes in brightness, if the dc component is not present. Average brightness can change only from frame to frame but not from line to line.

Video signal corresponding to picture information varies in accordance with the variation of intensity light at various picture elements. Pedestal height is the difference between pedestal level and the average value of the video signal. Pedestal level may h used as a reference level to indicate average brightness of the signal.

The ratio of Picture Information to Sync Pulse Amplitude

Sync pulses are required at the horizontal and vertical traces to trigger the respective scanning oscillators. During the trace, the video signal changes between white and black levels.

Upper 25% is occupied by sync pulses and 65% of the carrier amplitude is occupied by the video signal. The transmitted signal has a picture to sync (P/S) ratio is equal to 10/4.

The overall arrangement of combining the picture signal and sync pulses may be considered as a kind of voltage division multiplexing.

If sync pulse amplitude is increased to reduce the ratio say to 10/7, the contrast’ the picture will be degraded.

If the picture information is increased to increase the above ratio, sav 10/3, the sync pulse amplitude would become inadequate to keep the picture stable.

Three brightness level of the Composite Video Signal shown below.

To minimize the noise effect the lowest 10% of the voltage range is not used. At the Rx picture tube is biased to ensured that a received video voltage corresponding to about 10% modulation yields complete whiteness at the particular point on the screen.

The composite video signal contains blanking pulses to make the retrace lines invisible by raising the signal amplitude slightly above the black level (75%) during the time the scanning circuits produce retraces.

The repetition frequency for;

The figure of details of horizontal and vertical blanking pulses shown below. 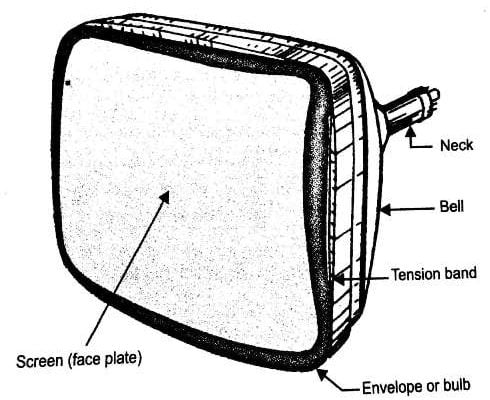