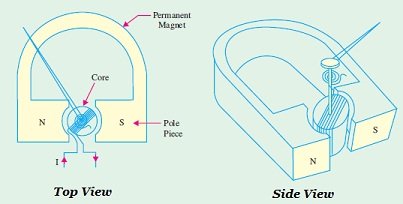 The Permanent Magnet Moving Coil (PMMC) Meter movement was invented by D’Arsonval. Hence, it is also called D’Arsonval movement. The power consumption in this system is very low. It requires low current for free-scale deflection (FSD). This system has a permanent magnet in the horseshoe form with soft pole pieces attached to it. Between the pole pieces is a cylinder of soft iron.

It provides a uniform magnetic field in the air gap between the pole pieces and the cylinder. The coil is wound on a light metal frame and is mounted so that it can rotate freely in the air gap. The pointer attached to the coil moves over a graduated scale, which indicates the angular deflection of the coil and therefore the current through the coil.

The basic PMMC movement is often called the D’Arsonval movement, after its inventor. This design offers the largest magnet in a given space and is used when maximum flux in the air gap is required. It provides an instrument with very low power consumption and low current required for full-scale deflection. It can be used for D.C. measurements only.

As shown in the figure below, it consists of a permanent horseshoe magnet with soft iron pole pieces attached to it. Between the two pole-pieces, a cylinder-shaped soft iron core is situated. A coil of fine wire wound on a light metal frame moves around the cylinder-shaped soft iron core. The metal frame is mounted in jewel bearings so that it can rotate freely. A light pointer attached to the moving coil moves up-scale as the coil rotates when current is passed through it. The rotating coil is prevented from continuous rotation by a spring which provides restoring torque.

The moving coil movement described above is being increasingly replaced by taut band movement in which the moving coil and the pointer are suspended between bands of spring metal so that the restoring force is tensional. The bands perform two functions (i) to support the coil and (ii) to provide restoring torque thereby eliminating the pivots and jewels used with coil spring movement.

As compared to the pivoted movement, the taut-band has the advantages of

This is based on the suspension-type galvanometer mechanism. This is used in laboratories where high sensitivity is required and the deflecting torque is very low. When the torque is low, even the low friction of pivots and jewels are to be eliminated. The figure is shown below the construction details of a taut-band suspension mechanism.

This meter movement works on the motor principle and is a current-responding device. The deflection of the pointer is directly proportional to the amount of current passing through the coil.

When direct current flows through the coil, the magnetic field so produced reacts with the field of the permanent magnet. The resultant force turns the coil alongwith its pointer. The amount of deflection is directly proportional to the amount of current in the coil. Hence, their scale is linear. With correct polarity, the pointer reads up-scale to the right whereas incorrect polarity forces the pointer off-scale to the left.

If the coil is carrying a current of i A,

the force on a coil side = Bil N

The value of control torque depends on the mechanical design of the control device. For spiral springs and strip suspensions, the controlling torque is directly proportional to the angle of deflection of the coil.

We will discuss the following three characteristics:

It is the current needed to deflect the pointer all the way to the right to the last mark on the calibrated scale. Typical values of Im for D’ Arsonval movement vary from 2 mA to 30 mA. It should be noted that for smaller currents, the number of turns in the moving coil has to be more so that the magnetic field produced by the coil is strong enough to react with the field of the permanent magnet for producing reasonable deflection of the pointer. The fine wire has to be used for reducing the weight of the moving coil but it increases its resistance. Heavy currents need thick wire but a lesser number of turns so that resistance of the moving coil is comparatively less. The schematic symbol is shown in the figure below.

It is the dc ohmic resistance of the wire of the moving coil. A movement with smaller Im has higher Rm and vice versa. Typical values of Rm range from 1.2 W for a 30 mA movement to 2 kW for a 50 mA movement.

It is also known as current sensitivity or sensitivity factor. It is given by the reciprocal of full-scale deflection current Im.

Following are some of the advantages of PMMC which are important from the subject point of view:

PMMC has some disadvantages too. These are given below :

Transducer and Its Classifications