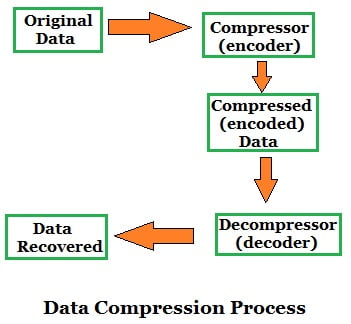 In his 1948 paper, “A Mathematical Theory of Communication,” Claude E. Shannon formulated the theory of data compression.

In computer science and information theory, data compression or source coding is the process of encoding information using fewer bits (or other information-bearing units) than an unencoded representation would use through the use of specific encoding schemes. One popular instance of compression with which many computer users are familiar is the ZIP file format, which, as well as providing compression, acts as an archiver, storing many source files in a single destination output file.

As with any communication, compressed data communication only works when both the sender and receiver of the information understand the encoding scheme. For example, this text makes sense only if the receiver understands that it is intended to be interpreted as characters representing the English language. Similarly, compressed data can only be understood if the decoding method is known by the receiver.

There are two main types of this technique:

Lossy data compression is named for what it does. After one applies lossy data compression a message, the message can never be recovered exactly as it was before it was compressed. When the compressed message is decoded it does not give back the original message. Data has been lost. Because lossy compression cannot be decoded to yield the exact original message, it is not a good method of compression for critical data, such as textual data. It is most useful for digitally sampled analog data (DSAD). DSAD consists mostly of sound, video, graphics, or picture files. Algorithms for lossy compression of DSAD vary, but many use a threshold level truncation. This means that a level is chosen past which all data is truncated. In a sound file, for example, the very high and low frequencies, which the human ear cannot hear, maybe truncated from the file.

An example of lossless vs. lossy compression is the following string:

This string can be compressed as:

In a lossy system, using 26 instead, the original data is lost, at the benefit of smaller file size.