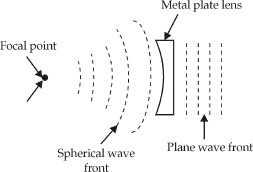 Lens Antenna is an antenna which consists of an electromagnetic lens with a feed. In other words, a lens antenna is a three-dimensional electromagnetic device whose refractive index is different from unity. It acts as a glass lens in optics.

They are usually made of polystyrene or Lucite. They are used to:

Principle    A lens antenna in association with a primary feed antenna in transmitting mode is shown in figure below.

When the feed is kept at the focal point of the lens antenna, the diverging rays (spherical wavefront) are collimated (parallel rays) forming a plane wavefront after their incidence on the lens and passing through it. Collimation occurs because of the refraction mechanism.

Lens antenna in the receiving mode is shown in the figure below.

Here again, incoming parallel rays converge at the focal point after passing through the lens due to the refraction mechanism. This is an indication of the validity of the reciprocity theorem. Collimation is also possible if the lens has a refractive index less than unity. Lens antennas are used in association with a point source (ideally). But in practice, it is used with horn-like antennas.

These are of two types:

The dielectric lens is also known as the delay lens. Here, outgoing electromagnetic rays are collimated and are retarded or delayed by the lens material or media. This is illustrated in the figure below.

E-plane metal plate lens: in this, the outgoing wavefront is speeded up by the lens material. This is shown in the figure below.

The dielectric lens is again of two types: 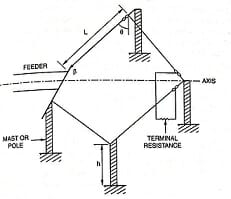