An optical fibre is a flexible and transparent fibre, usually made of glass or plastic. It functions as a waveguide / light pipe to transmit light from one end of the fibre to another end using the fairly simple and relatively old technology of fibre optics which is based on refraction of light. It is used widely in transmission over long distances and high BW(bandwidth).

Optical fibre is a long, thin transparent dielectric material made up of glass or plastic, which carries electromagnetic waves of optical frequencies [visible to infrared] from one end of the fibre to the other by means of multiple total internal reflections. Thus, optical fibres work as waveguides in optical communication systems.

An optical fibre consists of an inner cylindrical material made up of glass or plastic called core. The core is surrounded by a cylindrical shell of glass or plastic called the cladding. The refractive index of core (n1) is slightly larger than the refractive index of cladding (n2), [i.e., n1 > n2]. Typical refractive index values are n1 = 1.48 and n2 = 1.46. The core diameter is ≈ 50 µm and the thickness of cladding is ≈ 1 or 2 wavelengths of light propagate through the fibre. The cladding is enclosed in a polyurethane jacket as shown in the figure below. This layer protects the fibre from the surrounding atmosphere. Many fibres are grouped to form a cable. A cable may contain one to several hundred such fibres.

Once light rays enter into the core, they propagate by means of multiple total internal reflections at the core-cladding interface, so that the rays travel from one end of the optical fibre to the other. The phenomenon of total internal reflection in a straight optical fibre is explained in the following way. Let the refractive index of the core is n1 and that of the cladding is n2 such that n1 > n2. As shown in the figure below, a ray of light AO is incident at ‘O’ on the end face of the core; let this ray makes an angle of incidence θ0 with the axis of the fibre.

So, all those rays which enter the core at an angle of incidence less than θ0 will have refracting angles less than θ1. As a result, their angles of incidence at the interface between core and cladding will be more than the critical angle. As a consequence, they will be totally reflected in core and travel by multiple total internal reflections.

As shown in the above figure, if the ray AO is rotated around the fibre axis keeping the angle of incidence θ0 constant, it results in a conical surface. As such, only those rays which are within this cone suffer total internal reflections so that they confine to the core for propagation. If a ray falls at the end face of the optical fibre at an angle greater than θ0 or out of the cone, that ray does not undergo total internal reflection at the core-cladding interface, it enters into cladding material and gets lost in the cladding material. Thus, for light rays to propagate through the optical fibre by total internal reflection, they must be incident on the fibre core within the angle θ0. This angle is known as acceptance angle.

Acceptance angle is defined as the maximum angle of incidence at the end face of an optical fibre for which the ray can be propagated in the optical fibre. This angle is also called acceptance cone half-angle.

Based on the variation of the refractive index of core, optical fibres are divided into

The core diameter of this fibre is about 8 to 10 µm and the outer diameter of cladding is 60 to 70 µm. There is only one path for ray propagation, so, it is called single-mode fibre. The cross-sectional view, refractive index profile and ray propagation are shown in the figure below. In this fibre, the transmission of light is by successive total internal reflections. i.e., it is a reflective type of fibre. Nearly 80% of the fibres manufactured today in the world are single-mode fibres. So, they are extensively used. Lasers are used as a light source in these fibres. These fibres are mainly used in the submarine cable system.

The construction of multimode step-index fibre is similar to single-mode step-index fibre except that its core and cladding diameters are much larger to have many paths for light propagation. The core diameter of this fibre varies from 50 to 200 µm and the outer diameter of cladding varies from 100 to 250 µm. The cross-sectional view, refractive index profile and ray propagation are shown in the figure below. Light propagation in this fibre is by multiple total internal reflections. i.e., it is a reflective type of fibre. It is used in data links which have lower bandwidth requirements.

The refractive index profile is circularly symmetric. As refractive index changes continuously radially in the core, the light rays suffer continuous refraction in the core. The propagation of light rays is not due to total internal reflection but by refraction as shown in the figure below. In graded-index fibre, light rays travel at different speeds in different parts of the fibre. Near the surface of the core, the refractive index is lower, so rays near the outer surface travel faster than the rays travel at the centre. Because of this, all the rays arrive at the receiving end of the fibre approximately at the same time. This fibre is costly. Either laser or LED is used as the light source. Its typical applications are in the telephone trunk between central offices.

Transmission of signal in graded-index fibre: In multimode graded-index fibre, a large number of paths are available for light ray propagation. To discuss intermodal dispersion, we consider ray path 1 along the axis of the fibre as shown in the above figure and another ray path 2. Along the axis of the fibre, the refractive index of the core is maximum, so the speed of ray along path 1 is less. Path 2 is sinusoidal and it is longer; along this path refractive index varies. The ray mostly travels in low refractive index region, so the ray 2 moves slightly faster. Hence, the pulses of signals that travel along path 1 and path 2 reach another end of fibre simultaneously. Thus, the problem of intermodal dispersion can be reduced to a large extent using graded-index fibres.

The main advantages of optical fibre are:

Difference between Homodyne and Heterodyne Detection 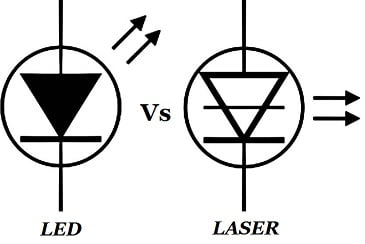 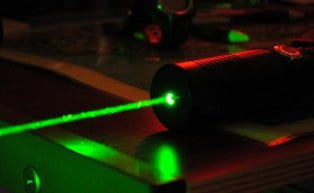