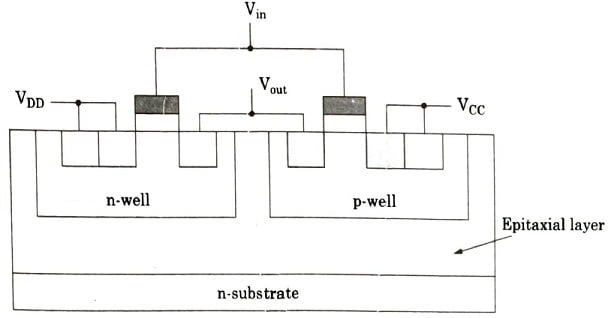 The CMOS (complementary metal-oxide silicon) fabrication technology is recognized as the leader of VLSI systems technology. CMOS provides an inherently low power static circuit technology that has the capability of providing lower power-delay product than bipolar, nMOS, or GaAs technologies.

The diffusion must be carried out with special care since the p-well doping concentration and depth with affecting the threshold voltages as well as the breakdown voltages of the n-transistors. To achieve low threshold voltages (0 to 1.0 V), we need either deep well diffusion or high well resistivity. However, deep wells require larger spacing between the n-type and p-type transistors and wires because of lateral diffusion and hence a large chip area.

The p+ wells act as substrates for the n-devices within the parent n-substrate and the two areas are electrically isolated.

In summary, typical processing steps are:

N-well CMOS circuits are superior to p-well because of the lower substrate bias effect on transistor threshold voltage and inherently lower parasitic capacitances associated with the source and drain regions. The flow diagram of the fabrication for the nMOS process is illustrated in the figure below.

The n-wells are created in the p-type substrate. The typical processing steps for the fabrication of CMOS devices may be summarized as below:

A logical extension of the p-well and the n-well approaches is the twin-tub fabrication process.

In this process, we start with a substrate of high resistivity n-type material and then create both n-well and p-well regions.

Through this process, it is possible to preserve the performance of the n-transistors without compromising p-transistors. Doping control is more readily achieved and some relaxation in manufacturing tolerance results. This is particularly important as far as latchup is concerned.

The twin-tub CMOS technology provides the basis for separate optimization of the p-type and n-type transistors. The arrangement of an inverter (CMOS) using the twin-tub CMOS Technology is shown in the figure below.

A prominent emerging CMOS process is Silicon-On-Insulator (SOI). As the name suggest it is a process where the transistors are fabricated on an insulator. Two main insulators are SiO2 and sapphire.

Difference between CPLD and FPGA 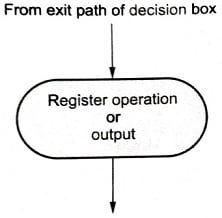