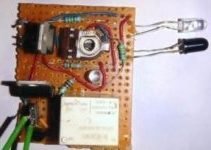 The Automatic Sanitizer Dispenser Machine is an infrared movement sensor-based dispenser machine. It used to dispense any alcohol-based liquid, called sanitizer. It has a touch-less activity, which makes user fearless and comfortable about the sterilization procedure. Another name of this Automatic Sanitizer Dispenser Machine is a contact-less or touchless sanitizer dispenser machine. Because of the inbuilt movement sensor, it detects the hand movement underneath the metal nozzle and opens the valve to dispenser sanitizer.

According to the set clock, it just permits 1ml fluid at once. In the hour of the world pandemic COVID 19, the programmed hand sanitizer container is a basic item to kill the impact of the CORONA virus. The major advantage of this machine that this whole machine circuit is made without using Arduino or any type of microcontroller.

Opamp (LM 358): Opamp is generally an amplifier IC which is used to amplify the input voltage and it is also used as a comparator to compare the inputs and generate output difference

Photodiode: A photodiode is a semiconductor device that converts light into an electrical current. The current is generated when photons are absorbed in the photodiode.

In this machine, the photodiodes are used as an IR receiver. It works as a diode which uses a switch it active when it connect in reverse bias and the  IR wave is transmit on it

IR Transmitter: An IR transmitter contains an LED that emits infrared light. It generates an IR wave when the voltage is applied. It is generally used in remote applications and in robotics.

This IC this use to conduct a constant voltage either 5v or 12v. It has three terminals input, GND, output.

12V Relay: Relays are switches that open and close circuits electromechanically or electronically. Relays control one electrical circuit by opening and closing contacts in another circuit. Relay is a magnetic switch that is active when the voltage is applied to its terminals.

In this machine, the transistor is used for as amplifier or switches it has three terminals BASE, EMITTER, COLLECTOR.

Working of the dispenser

The working principle of the automatic sanitizer dispenser machine is based on the IR wave transmission and reception.

When the machine is switched on through the DC power supply, the IR transmitter transmits the infrared wave. The wave strikes on a surface and reflected back. Then the reflected wave is received by the IR receiver which is a photodiode here.

This IR receiver or photodiode senses the IR wave and reacts like a short switch or circuit (when it is connected in reverse bias).

Then due to connecting of resistance it doesn’t short Vcc and GND. actually it generates some voltage and this voltage is given to the opamp negative input pin

Relay have 5 pins first two pin is use to on/off purpose.

It mostly used in hotels, restaurants, schools, offices, homes, hospitals, factories, and industries. During the time of COVID-19, it is one of the most needed products for humans. This dispenser machine can be used mainly at the main gate on any company, school, colleges, corporate houses, banks, shopping malls, Airports, and theatres. In short, it needed at every place where person to person contact could be possible.